This information originated at The Gateway Pundit.  The following young woman shared her thought on twitter which were: 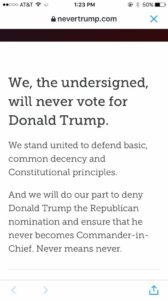 In addition to this less than encouraging interview with Fox New’s Gretchen Carlson where “Next Gen” Rina Bharara asserts that she’ll vote for Hillary Clinton over Donald Trump.

Why is she there?  What is she doing?  Why is she thwarting the will of the people?  Obviously, she’s part of the 21st Century Poll Tax where anyone, anywhere, young or old feels no responsibility or obligation to perform the duties they were send to perform.

Ms. Bharara is only indicative of a much deeper problem with American politics.  Her spirit is the same spirit that’s keeping John Kasich in the race.  Kasich has no chance of success unless the election is stolen.  He’s praying for a brokered convention and coveting his own illigitimate presidency.  From her comments, it seems that Ms. Bharara man be perfectly happy to help him steal the office.  Voters be dammed.