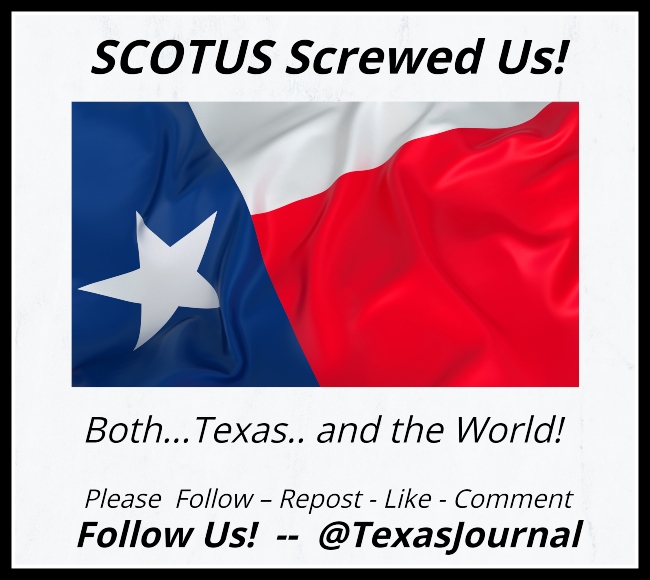 The United States Supreme Court (SCOTUS), by their willful dereliction and shirking of duty, permitted an illegitimate president to be installed in the Whitehouse.

On December 11, 2020, SCOTUS denied Texas’ motion due to lack of standing.

This is patently absurd.  A clearly defined constitutional dispute among the states is textbook standing.  We later learned it was cowardice, not lack of standing that caused the court to reject Texas.

According to Red State, Chief Justice John Roberts was heard screaming at other justices willing to perform their constitutional duty.   Evidently, it was his timidity that ultimately dissuaded this feckless court.

Count 1 – Texas argues that “electors appointed to Electoral College in violation of the Electors Clause cannot cast constitutionally valid votes for the office of President.”

Count 2 –  Texas asserted an Equal Protection claim, premised on the reasoning of the majority opinion in Bush v. Gore. In Bush v. Gore, the Supreme Court held that the Equal Protection Clause of the Constitution is violated when states apply differing standards for judging the legality of votes cast for president.

Count 3 –  Texas asserts a violation of the Due Process Clause of the Constitution. This claim is premised on Texas’s allegation that the election practices of the defendant states in 2020 reached “the point of patent and fundamental unfairness,” thus violating substantive due process.  The states violated their own election laws enacted by their legislatures which were in violation of the US Constitution.

The legitimacy of each of Texas’s counts is indisputable.  It’s evident, Texas was denied due process and equal protection under the law.

Thus, nineteen states are challenging the election procedures in the four defendant states. The combined total of 19 states equates to 38 percent of the states contesting the election results as a direct consequence of what transpired in Georgia, Michigan, Pennsylvania, and Wisconsin.

President Trump also asked the court to let him join as a party.  How does the man from whom the election was stolen not have standing?

The reprehensible John Roberts Supreme Court ignored 19 States and the President.  Do we even have a judicial system?

The below American Thinker piece describes specifically, what these violations of the US Constitution were.  It’s evident, permitting the unilateral and illegally changing of duly enacted laws of several state legislatures permitted the 2020 Presidential Election to be stolen.

After the Supreme Court of the United States refused to perform its constitutional duty, Mark Ramsey, an elector from Texas’s 10th Congressional District, introduced a resolution:

Justice Thomas weighed in with this dissent:

One wonders what this Court waits for. We failed to settle this dispute before the election and thus provide clear rules. Now we again fail to provide clear rules for future elections. The decision to leave election law hidden beneath a shroud of doubt is baffling. By doing nothing, we invite further confusion and erosion of voter confidence. Our fellow citizens deserve better and expect more of us. I respectfully dissent.

The Biden administration is a moral and national shame.  The coup that installed the current illegitimate regime was directly facilitated by the feckless United States Supreme Court.

American Thinker Describing the Results of violations of the US Constitution:  Click Here