This is from the Amazon intro for the shocking new expose from a Secret Service Agent tasked with protecting the Clintons during the Presidency of Bill Clinton.  The absolute last thing we need is another Clinton in the Whitehouse.

Posted directly outside President Clinton’s Oval Office, Former Secret Service uniformed officer Gary Byrne reveals what he observed of Hillary Clinton’s character and the culture inside the White House while protecting the First Family. Now that a second Clinton administration threatens — their scheme from the very beginning — Byrne exposes what he saw of the real Hillary Clinton.

While serving as a Secret Service Officer, Gary Byrne protected President Bill Clinton and the First Family in the White House and outside the Oval Office. There, he saw the political and personal machinations of Bill and Hillary Clinton and those who were fiercely loyal to them. In CRISIS OF CHARACTER Byrne provides a firsthand account of the scandals–known and unknown–and daily trials ranging from the minor to national in scale.

Having witnessed the personal and political dysfunction of the Clinton White House–so consumed by scandal and destroying their enemies, real and imagined–Byrne came to understand that, to the Clintons, governing was an afterthought. He now tells this story–before voters go to the polls–in the hopes that Clinton supporters will understand the real Hillary Clinton. 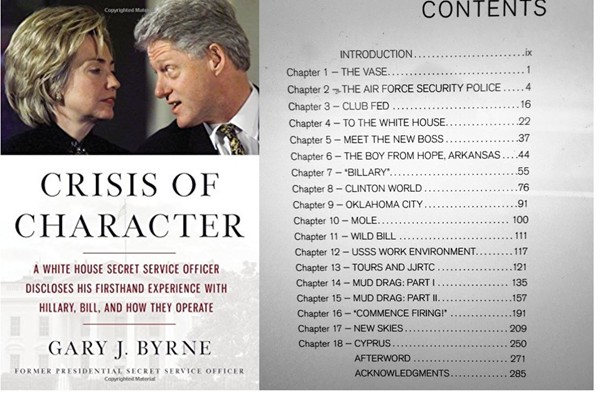