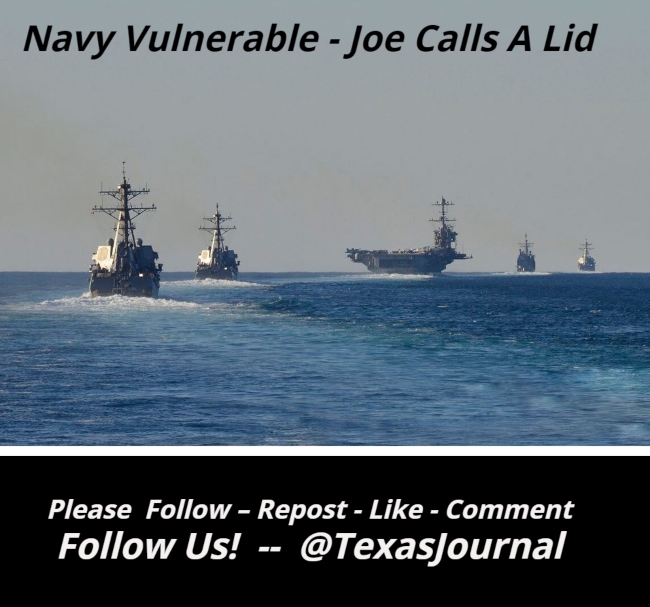 The accompanying articles note that the United States Navy, still struggling with a significant asset deficiency from Joe’s former administration.  The Navy will not achieve its goal of 355 ships until 2050.

Don’t worry.  Aljazeera reports that transgenders are permitted to serve and according to the Whitehouse:

“Allowing transgender people to serve would have a minimal effect on military readiness and healthcare costs.”

President Trump understood that we live in a dangerous world and we must be ready to defend ourselves or go on the offensive if the situation warrants.

It’s why Joe’s Press Secretary Mocks Space Force, it’s why he billets Guardsman on concrete in a parking garage, it’s why he’s instituting a “Political Commisar” system in the military.  Joe and his leadership fear Whites.  ALL WHITE MALES are suspect.

The Biden administration is bad for our Armed Forces and bad for America.

Days ago, we had a serious administration.  We had the Trump Administration.  Decades ago we had the Reagan Administration.  Both Trump and Reagan understood the threats.  It was President Reagan and Navy Secretary John Lehmann that built a 600 ship Navy.  A Navy of sufficient stature and power to defend American and her allies.

These were serious men.

Given the actions of the current feckless administration, war seems inevitable with either Russi, China, Iran, or all three.  It will be the first time since World War II that we’ll face a peer or near-peer adversary.  Not just one, but multiples.  We will be forced to do so with a demoralized, defunded, dissipated, and disrespected United States Armed Forces.

Joe’s policies assure this isn’t going to end well for us.